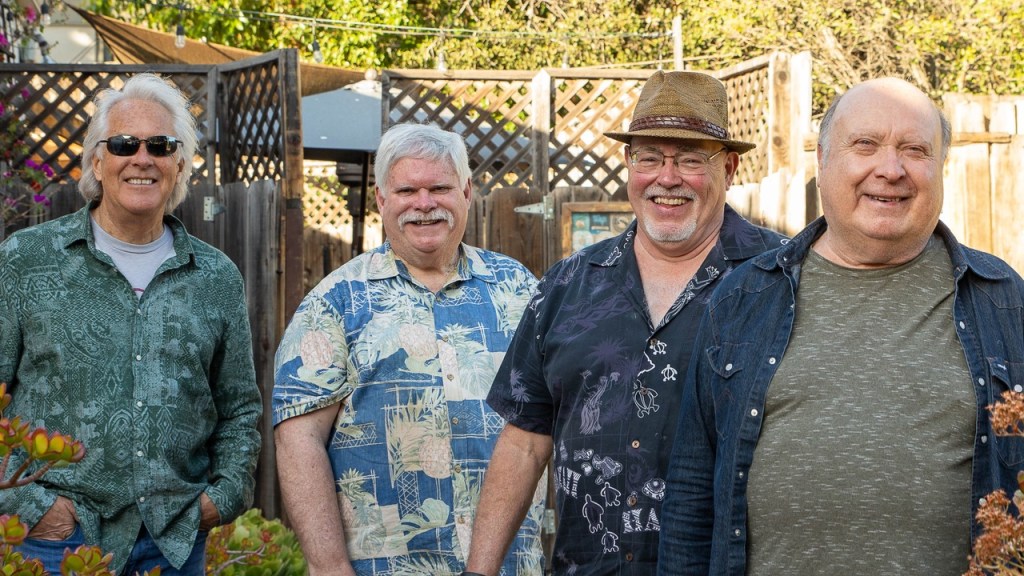 A warm “Happy Birthday” to local musician and good guy Chuck Brewer! Hope your real birthday bash is as fun as your “That 70s Birthday Party and Benefit” on Saturday night at the Salty Seal Brewpub and Sports Bar on Cannery Row, 7-11 p.m. Turning 70 is something to celebrate, and it’s also a great gift idea to support the good work the local Guitars Not Guns chapter is doing. The $25 cover charge goes to the nonprofit that helps at-risk youth choose music (guitars and lessons) rather than hanging out in the streets where all sorts of trouble might lurk.

The event is a three-part music concert, in the tradition of ancient San Francisco ballroom dancing. Of course, The Chuck Brewer Band grabbed the headlines, though Brewer said he was leaving first so he could enjoy the rest of the evening with all his friends and supporters who came to celebrate. There will be cakes and giveaways in addition to the full bar and pub grub available on the menu. The Transducers and The Lighthouse Band are the other two bands, two excellent local cover bands that will rock the dance floor.
“There’s a little connection to the TV show ‘That ’70s Show.’ The theme song is ‘In The Street’, which by the way was originally performed by Memphis band Big Star with Alex Chilton , who was the lead singer of the Boxtops,” Brewer told me. “But long story short, this show used that song as their intro music. They didn’t do Big Star’s version; they had Cheap Trick to do it. The song ends with a repeating phrase “We’re all fine”, the same as the Cheap Trick song “Surrender”.

Well, this is all very interesting Chuck, but what’s the connection?

“The crossover is this lyric, ‘We’re all fine.’ We are going to do the Cheap Trick song in our set,” he said.

That’s cool, man. I love how seriously Brewer takes how to make his band’s appearances an event with entertainment aspects that aren’t your ordinary gig that has no spice other than the music. A real pro, this guy. His band includes a lineup of pros who back his lead vocals and harmonica/saxophone playing, drummer Rod Wilson, bassist Jeff Covell and guitarist Steve Snider. Their musical style is a mixture of steaming classic rock, blues and originals.

The Lighthouse Band follows Brewer’s first set with their mix of classic rock, folk and funk, which sometimes includes tunes you might not expect. Kind of a deep approach to making covers. I just saw the band for the first time last weekend and enjoyed the musical and vocal quality of guitarist Kyle Kovalik, bassist Bob Langford and drummer Erik Dormody.

Transducers close out the night with more rock ‘n’ roll filled with full harmonies and powerful vocals from Sam Salerno, Jason Stout, Lisa Rutta and Taylor Safina. There’s room on the outdoor patio for dancing, right next to the bands performing on the raised stage in the corner. It’s an indoor/outdoor type of venue, with the sliding door open to the indoor bar, located at the back of the restaurant which faces Cannery Row. It’s a sweet little space and should be a fun night of music and revelry.

Next week’s column will be filled with news about the 65th Annual Monterey Jazz Festival and I can’t wait (www.montereyjazzfestival.org). But there’s still more music in town that week, so I’ll try to incorporate a good representation of music events over the next two weeks for the rest of the column. And speaking of jazz, let me start with our jazz guitar star Bruce Forman who will perform his show “The Red Guitar” for the first time in two years on Sunday at 4 p.m. at St. Dunstan’s Episcopal Church, located in 28005 Robinson Canyon Road in Carmel Valley (www.stdcv.org or 831-624-6646). He will also be performing at the jazz festival with the Réunionnais trio, on September 23, 7:30 p.m.

“The Red Guitar” he plays once belonged to one of his guitar idols, jazz guitar legend Barney Kessel. He was inspired to create the musical sketch for the stories “The Red Shoes” and “Red Violin”, both created to illustrate how art “has a way of taking control of your life”, he said. says, “and both to make sense of and to demand sacrifice. I combine my love of acting, storytelling, writing, history and comedy to create a booklet that explores the reasons that we play music or do art in. Because I have the ability to talk and play at the same time, I built a show around that.

The Massachusetts native grew up in Texas and the San Francisco Bay Area and now calls Carmel Valley home. Besides being one of the best bop guitarists in the world, he played guitar in three of Clint Eastwood’s films and was a teacher in the Studio/Jazz Guitar department at USC. He also spent many years as a traveling clinician with the Monterey Jazz Festival educational program. Tickets for “The Red Guitar” are available online at www.stdcv.org/concerts/ and at the door for $30, with students and under 18s admitted free. A reception will follow.

Just like the good old days when I had my Best Bets column section, here’s a list of upcoming music/events for the next two weeks.