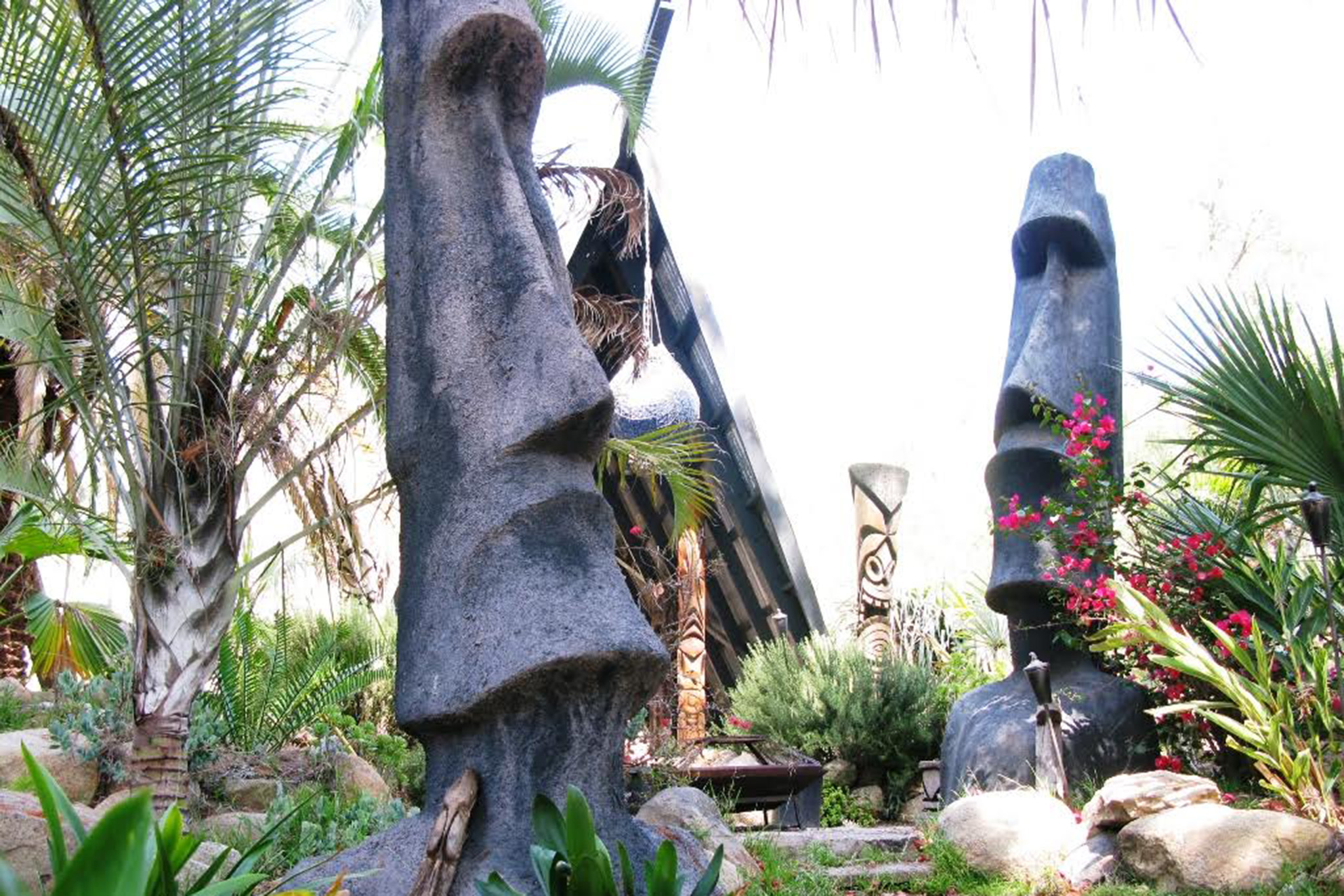 Bosko regards Tiki cups as equal to any other sculpture.

Even if you knew nothing at all about artist Bosko Hrnjak, you could get a pretty good idea of ​​who the man is and what he’s interested in just by taking a look around his sprawling property – and amply adorned – on the edge of Escondido. Like Mr. Plumbean by Daniel Pinkwater, the colorful hero of the children’s book The Great Orange Spot, Bosko could say: “My house is me and I am it. My home is where I love to be and it looks like all my dreams.

After passing through the (usually closed) gate with its warning signs, you’ll find yourself amidst an array of exotic plants, preserved rocks, a mix of antiques, half-planted ceramic shards and of a few large-scale outdoor art installations, all set against a backdrop of ruggedly beautiful mountains. There are many studio and store spaces; soft exotic music escapes from one of them. And you’ll definitely notice the impressive A-frame cabin in which he and his wife, musician Truus de Groot, were married about two decades ago.

Tanks to notice: Bosko Hrnjak stands in front of one of his installations.

Despite his succession, Bosko is best known for his work as a Tiki artist. He is one of the few people primarily responsible for the revival of what his friend, writer Sven Kirsten, has dubbed “Polynesian pop” – Mid-Century America’s creative reimagining of recreational island paradises. Legions of bars, restaurants, hotels, bowling alleys and apartment buildings were created in the style at its height, only to quickly disappear after the aesthetic tide turned. Bosko spent his early years in Los Angeles’ San Gabriel Valley; his time there brought him into intimate connection with some of the Tiki Dream World ruins in the area. And that left a permanent impression that he has been inspired by ever since. His iconic contribution to the Tiki revival has been two-fold: he was the first artist in decades to carve wooden Tiki figurines, and also to craft elaborate ceramic cups intended to hold tropical cocktails. He viewed the latter as a neglected art form in its own right. More privately, he has set up his own Tiki bar at home, the very cool Kapu Tiki Room, which stands here in his courtyard – “a museum, a tribute to the first movement”. (You might not be able to see the private version, but San Diegan locals can see the Bosko maximalist interior designed for San Diego’s False Idol bar at Craft & Commerce anytime.)

A charming and talkative speaker as humble as he is enthusiastic, Bosko will tell you all about the Tiki part of his creative life as he walks around delivering what he says he can turn into an hour-long tour or three hours. , depending on your preference. But you’ll quickly learn that there’s more to Bosko than Tiki. “I could spend three hours just talking about plants,” he warns me, just before pointing to some of his rare primitive cycads. “They are in pre-flowering; as old as the dinosaurs. I want to hear about the plants – and also the stories of William Westenhaver and the Witco furniture, and the weird instruments in the house, and the matchsticks and the matchbooks – but more than that, I want to make sure that I hear about Bosko. work in the desert. I want to see some of the many photographs he took as part of his effort to document both the desolation and startling beauty of the desert world around the Salton Sea and its adjoining environs.

RV abandoned in the desert.

Fortunately, he obliges me and we enter one of his studios. Bosko has plenty of stories to go with his photographs, and he regales me as we flip through a portfolio, a map of Imperial County laid out alongside. One involves being chased by a man posing as a police officer, which he and Truus evaded. Another, with the discovery of a hotel with a room full of organs that once belonged to “some kind of musician Downey”. By the time of his second visit there, the instruments had been completely destroyed by vandals. Many stories feature the motif of households whose inhabitants died or simply flew away without a trace – just sad, humble, haunting memorials. The desert is eerily full of them, hidden in plain sight in Imperial County.

Like the vanishing urban and suburban realms of Tiki he explored for decades, the desert offers another creative hotspot for the artist, and he regularly exploits it for the discovery of artifacts and inspiration. . There is a common thread for Bosko: “It’s just mid-century America, and where the empire has gone since its heyday. That’s the goal of all the work… Everything revolves around that, to varying degrees.

The Salton Sea Once an icon of the good life, now becoming a mass of toxic dust.

Some of his desert photographs have entered the Salton sink project, a collaboration with Truus which the duo presented in Amsterdam, which combines images and music to evoke the gloomy atmosphere of the Salton Sea, that spooky and trashed once golden dream, a body of water created by a great accident that in another was a home of bustling resorts and smiling vacationers on water skis. The entire place once served as an energetic icon of the California good life. Today, the sea continues its gradual metamorphosis into a mass of toxic dust.

When this project originated just over a decade ago, Bosko hoped that some ecological good might come from it. Back then, he says, there was still some hope, at least more than there is today. “At the time, you could still have saved him,” he says. He didn’t have much luck. Despite the power of the work and the importance of its subject, “nobody wanted to touch it”.

But the photos remain — see them on saltonsink.com — and Bosko stays busier than ever with his activities: paintings, Tikis, mugs, urban archaeology. Follow his work at tikibosko.com.