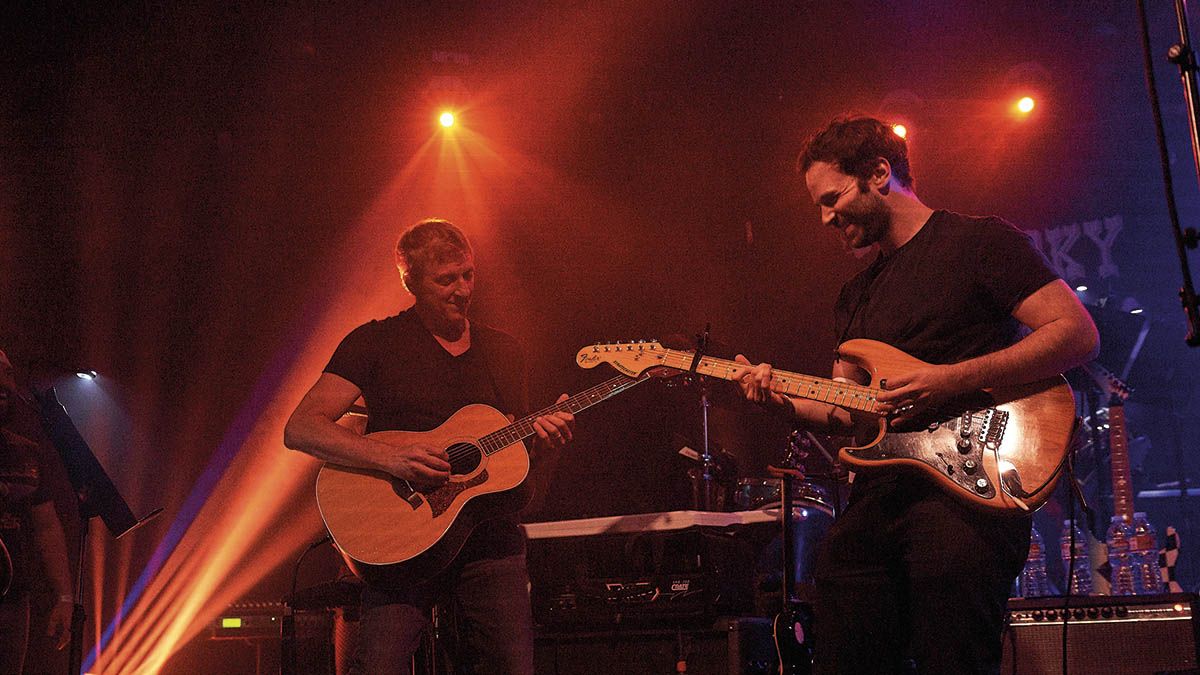 One of the very first scenes of the very first episode of Cobra Kai portrays Johnny Lawrence, former karate badass (to use Johnny’s favorite descriptor) and 1980s artifact, hopping around in his battered red Pontiac Firebird and belting out Poison’s glam-metal anthem just a good time.

It’s one of the many ’80s rock soundtrack moments we’re treated to, thanks to future sensei: Throughout the first three seasons, Johnny shamelessly rocks a zebra No lies baseball t-shirt, inspires his teenage karate disciple, Miguel Diaz, to change his ringtone to Ratt’s round and round and, later, sneaking Diaz into a Dee Snider concert as physical therapy for a (literally) back-braining injury. Clearly, Johnny Lawrence loves hair metal.

But what about the actual actor who plays him, Billy Zabka?

“Yes, Billy Zabka likes hair metal”, confirms Billy Zabka himself, speaking to guitar world via Zoom after finishing shooting for Cobra Kaiis the new fourth season. “I lean more towards the Def Leppards, the Whitesnakes, the Van Halens. I’m all 80s rock. That was my music.

That music, Zabka reveals, was there with him the day he auditioned for the role of Johnny Lawrence – his very first film appearance, by the way – in the original The Karate Kid. He remembers he was in his late teens and drove to the audition in his dad’s Volvo, blowing up Dio’s Rainbow in the dark.

“I arrived, walked into this room with all these karate black belts, and everyone was out Johnny-ing the next guy,” he says. “It was tense and the energy pushed me out of the room and into my dad’s Volvo. And I sat there with my little cassette player and threw some Zebra. It helped me not to get upset. »

Zabka landed the role, of course. But more than that, he inhabited it so fully – imbuing Johnny with a depth and pathos that turned him into something of an anti-hero – that he went on to play angry bad boys in a series of films from the 80s, including the 1985 high school caper Just one of the guys and the 1986 Rodney Dangerfield vehicle Back to school.

But before doing anything, Zabka was playing the guitar. In fact, he calls the instrument “the theme of my life since I was 10.” It was at this age that he first learned the instrument, after moving with his family from New York to Southern California.

“It was a way of trying to fit in and meet friends,” he says. “I would go to a little park, Shadow Ranch [in the San Fernando Valley] and learn guitar with a bunch of guys and a nylon string.

He continued to perform throughout his school years, including at his high school Battle of the Bands in El Camino Real, where his band, Siricon (“a silly and funny name”) had stiff competition.

“We played against Fishbone,” recalls Zabka with a laugh. “Angelo Moore, John Fisher, I went to high school with these guys, and they were running around on stage with horns, playing all this crazy jazz and fusion type music that nobody had ever heard before.”

In fact, Zabka continues, “Here’s an even crazier story: In middle school, Angelo lived across the street from me, and when they started the band, they didn’t have a lot of instruments. So I had a little keyboard, I had an amp, and they would come and use my stuff and I jammed with them. (When reached by phone, Moore recalled, “I remember going to his house, kicking him, playing games and running down the street. Childhood memories, man…”)

Zabka obviously didn’t pursue music with the same zeal as his schoolmates Fishbone (or, for that matter, his father, Stan Zabka, a successful pianist and composer who co-wrote the holiday classic of the 1960s. 1950 Christmas Eve in my hometown and later worked for and performed on The show tonight), but he took it seriously.

He enrolled in the Dick Grove School of Music in California, where he learned to read music and studied to become a session musician and session musician. He also played in a series of bands, including one with a few friends called Acoustic Outlaws. . “We were performing at pumpkin festivals and things like that, where we were sitting on haystacks singing Listen to music and Layla“, he recalls.

Zabka says he “deeply loved the guitar,” but at the same time, “it’s always been a hobby. I went to college at Cal State Northridge and got into film school, then I was chosen for The Karate Kid. So, as far as my career goes, I was headed towards film. But music was the other thing that nurtured me artistically and creatively. And that’s also why I’ve never chosen not to pursue professionally – it’s something I don’t seek to get anything in return for, other than the joy of doing it.

That’s not to say he doesn’t find time to incorporate the guitar into his acting life whenever possible. On the set of Back to school, for just one example, Zabka recalls impromptu jam sessions with co-star Robert Downey Jr. at their hotel after days of filming in Madison, Wisconsin. “I always brought my guitar to any set I went to, and [Downey] happened to bring a Casio with him. So we did a little scrambling. And he’s an excellent pianist, actually.

In 2019, Zabka got the opportunity to live out his rock dreams by performing to huge audiences at Hollywood’s famed Whiskey a Go Go (Johnny Lawrence, we’re guessing, would be super jealous).

Armed with a Taylor acoustic (his other gear over the years has included a Takamine acoustic electric guitar, a white 12-string Ovation, and a “brown” Les Paul Custom with a Marshall battery), he joined Cobra Kai composers Leo Birenberg and Zach Robinson on stage to perform Johnny’s theme song, degenerate ace.

At first, Birenberg and Robinson assumed that Zabka would just strum and try to keep up. “They sent me the basic chords, then I had a rehearsal with them in Hollywood and it sounded like shit,” Zabka recalled. “They were like, ‘Okay, that was good. See you tomorrow.'”

But much like Johnny Lawrence taking on Daniel LaRusso in the 1984 All-Valley Karate Tournament, Zabka intended to show degenerate ace without mercy.

“I came home that night and got my guitar out, sat by the fire pit in my backyard and learned all the chords, all the licks, everything,” he says.

The following night at The Whiskey, “We got on stage and I think I surprised Zach and Leo when I started to jump in and play the song. You can see that in the video that’s uploaded, where Zach is kind of like looking at me, like, ‘Hey, you get it!’ Zabka laughed, “But what a thrill to play Johnny Lawrence’s anthem, and Whiskey of all places. I mean, all the dots came together.

It was kind of a complete guitar moment for Zabka, and not the only one. He recalls a moment in 2015 when, by a twist of fate, one of his early guitar idols, Eddie Van Halen, gave him some sort of impromptu guitar lesson.

“The first gig I went to was Van Halen – the 1980 Invasion tour,” Zabka says (and true to form, in a Season 1 episode of Cobra Kai Johnny Lawrence can be seen wearing an Invasion t-shirt). “Being 14 and watching Eddie come out and play Eruption, it was as if this music came from the sky. He was just larger than life.

A few years ago, Zabka celebrated her 50th birthday by going to see Van Halen, reunited again with David Lee Roth, at the Hollywood Bowl. “And I ran into a good friend of mine, Janie, who had actually married Eddie. And she said, ‘Do you want to go meet Eddie?’ I’m like, ‘Are you kidding? Yes, I want to go meet Eddie! »

He continues: “So I’m with a couple of my buddies, and we all get in an elevator and go down in the locker room… and there’s Eddie Van Halen. And he was just the nicest guy. At one point, he hands me his guitar and he says, “Do you play? I go, ‘A little – let me show you my version of I’m not talking about love.’

“So I go out there and play it on the fretboard. He says, ‘No, man, no.’ And he literally gets behind me and starts playing the notes and showing me how it’s just a minor thing. And then a few minutes later he said, “Okay, I have to get ready.” It was so epic.

Zabka may have had some guidance from the master, but these days he functions as a kind of six-string sensei himself. “My son is just starting to play, and he’s the same age as me when I started,” he says. “So I have a renewed love and interest in the guitar, and in removing the cobwebs and rust in order to show it certain things.”

Even as Zabka’s profile rises again with Cobra Kai (in addition to his main role, he is also an executive producer of the series), he always makes time for his first love. “The guitar is a companion, as it always has been,” he says. “It’s part of life for me.”

He recalls a recent visit with an old friend as an example. “I was just in Los Angeles visiting a friend of mine who I lived with for eight years in the late 90s. We used to have these big parties together at our old condo, and everybody came and brought instruments and we had these big jam circles.

“He just bought a house in Toluca Lake, so we went to a restaurant for dinner and then drove back to his house. So we walk around his house, and there’s his piano. We had friends with us, and he had his Taylor around. We hadn’t played together in about 15 years, but I grabbed this guitar and we walked right into Sweet Home Alabama. And it went on from there for the next hour. We just got stuck. It was so awesome. I love the guitar.