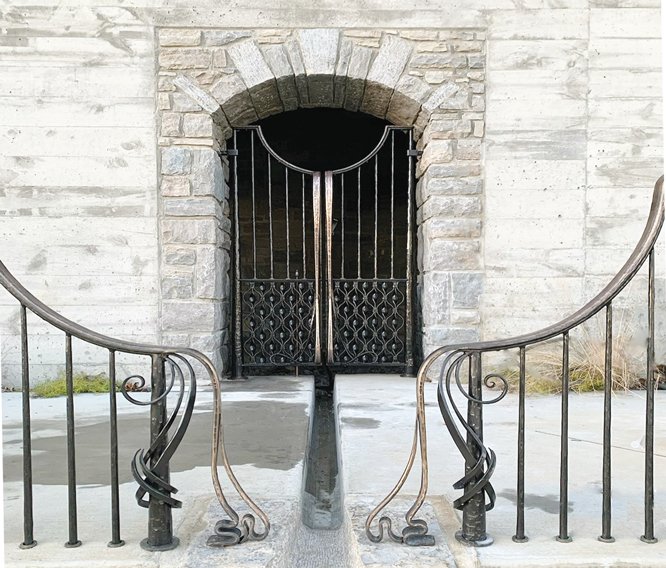 Maynard Studios, the blacksmith shop owned and operated by artists Matthew and Karine Maynard, has been an Anderson County staple for over 20 years. But unlike many blacksmiths in the Bluegrass region, horseshoes are an item the Maynards don’t make. Instead, their practice focuses primarily on architectural blacksmithing, designing and fabricating large works such as fences and gates, railings, window grilles and chandeliers. Additionally, the couple creates smaller pieces like knobs and hinges, furniture, and sculptures that enhance the beauty of indoor and outdoor spaces.

Matthew, who grew up in Pike County, and Karine, originally from Wisconsin, were introduced by a mutual friend while attending Nevada’s famous arts and culture festival, Burning Man.

“Our first date was in the desert,” Karine said.

When they met, Matthew was already practicing blacksmithing, which he had taught himself as a child, armed with coal and a book from the Foxfire series, made up of anthologies designed to preserve and foster the culture of Appalachia with books on topics ranging from foraging and mountain remedies to music and blacksmithing.

“I made a little makeshift forge, and I would just heat things up and see what happened,” he explained. “I would take the book and look at a picture and reverse engineer what they were doing.” he explained.

“When I met Matt, that’s when I started working with heavy metals. I could do everything – just smaller,” Karine said.

“He bought me my first set of hammers and my first anvil, and

I was like ‘I really like this guy.’ He bought me my own welder, and it was like an engagement ring. I thought, ‘I’m going to marry this guy.’ »

Maynards work primarily with plain steel, bronze and some stainless steel, and can add special finishes like gold or silver leaf. Of their art style, Matthew said, “We do a wide range of design work. It can range from classic French to mid-century modern to something truly contemporary.

The convenience of creating a variety of architectural styles was a conscious choice for the Maynards, allowing them to build unique pieces to suit each client.

“We look at our clients’ aesthetics and reflect theirs,” Matthew said. “It’s our client’s story, but it’s our writing. You can see it’s our job, but we’re not stuck to one aesthetic. We like having the opportunity to do something new every time.

“We never repeat our designs twice,” added Karine, “and we never copy anyone’s work either.”

Matthew admits he initially thought that starting from scratch with each design might be an obstacle, that they might run out of ideas. But it was less difficult than expected by the couple. “Everyone is so unique, and once you get to know the people a bit and see their space, it’s pretty easy to find things that fit them,” he added.

While blacksmithing is a small profession, Maynard Studios stands out from the crowd not only for what they do but also for what they don’t – including buying individual parts and welding them together, which is common. at manufacturers. Instead, the Maynards design and create each element by hand, making large pieces and adding their hand-forged components rather than purchasing individual parts for their design.

It’s one of the things that sets them apart, says Karine.

Time and care have paid off for the Maynards, with their work earning international recognition and multiple awards from the National Ornamental and Miscellaneous Metals Association, as well as the Matthew Al Smith Fellowship from the Kentucky Arts Council. Their work can be found in homes and buildings in the United States as well as Europe.

A true family business, Karine says she and Matthew are on hand for every installation. “We don’t have an outside team that we hire.”

Matthew explained: “I don’t trust others to care as much as we do – we’ve seen this thing start to finish, and we want to make sure the last bolt is lined up perfectly.”

The Maynards’ work is currently featured in Intertwined, a joint exhibition at the Headley-Whitney Museum in Lexington through June 19. In addition to photographs and large and small pieces from Maynard Studios, the three-part exhibition also includes a 30-year retrospective display of the colorful and playful paintings of local artist Ellen Skidmore and a collection of 19th-century equine art. 20th centuries on loan from private collections. The Maynards’ contributions include furniture, candelabras, and other functional pieces, as well as purely decorative freestanding and hanging sculptures.

“It’s a really well-crafted show,” Karine said. “Our work blends very well with that of Ellen Skidmore. It is a real honor to be included in the list of fabulous artists who have exhibited there and to be recognized by our own community.

She added that the museum exhibit provides a unique opportunity for people to also see the small pieces and sculptural work they have done. “Much of our work is invisible otherwise,” she said. “It belongs to private residences, private estates and private event spaces.”

A piece called Giving Tree, displayed outside the show, was sponsored by Steve Wilson and Laura Lee Brown of Hermitage Farm and 21c Museum Hotels, will travel to Josephine Sculpture Park in Frankfort after the show and will serve as a “tree of donors” of this organization. .” Another fun Maynard Studios creation on display is a cluster of Bourbon ferns – whimsical plant-like sculptures made from salvaged bourbon barrel rings, which are a favorite of award-winning garden designer Jon Carloftis.

“I came up with the idea as a way to teach soldering skills – everyone makes things out of bourbon barrel staves, including us, but what do you do with those mountains of rings that go off to recycling? said Karine. “Create [the sculptures from the barrel rings] was so much fun that we kept making them.

Although most of their work takes place in private spaces, it is possible to view Maynard Studios’ work publicly by visiting many of the region’s bourbon distilleries, including Woodford Reserve, Maker’s Mark, Castle & Key, Buffalo Trace, Four Roses and others. Their creations can also be found at Ashbourne Farms and Hermitage Farms in County Oldham and Lexington’s downtown event space, The Apiary.

Soon, viewers will be able to learn more about Maynard Studios in an upcoming episode of the Kentucky educational television show “Kentucky Life,” which is scheduled to premiere on KET May 21. After a two-year hiatus, the Maynards also plan to hold an annual opening. studio on Nov. 5, where guests can tour the nearly 6,000 square foot blacksmith shop and see the Maynards and their team of studio assistants in action.

When reflecting on their approach, Matthew likes to point out an anecdote that he thinks reflects the approach he and Karine take to their craft.

“I saw Rob Samuels from Maker’s Mark speak once, and someone in the crowd asked him why they didn’t automate the bottle dipping process, and he said the speed wasn’t the question. The goal was to get his hands on the product. He used the words ‘intentional inefficiencies’ and I was like, ‘Whoa, that’s exactly what we’re doing,'” Matthew said. is to slow down, do this, create it with your hands and put some of your soul into it. Then you created something thoughtful for someone else, to bring them joy.

“I think it’s the coolest thing we’ve ever done,” he added. “We manage to have a positive impact on places and people.”

If you are going to: Intertwined, a three-piece exhibition featuring a preview of the work of architectural blacksmiths Matthew and Karine Maynard of Maynard Studios, as well as a retrospective by artist Ellen Skidmore and a display of rarely seen English and American equine art from private collections , will be on view at the Headley-Whitney Museum (4425 Old Frankfort Pike) until June 19. Gallery hours are Friday through Sunday, 10 a.m. to 4 p.m. More info at www.headley-whitney.org.