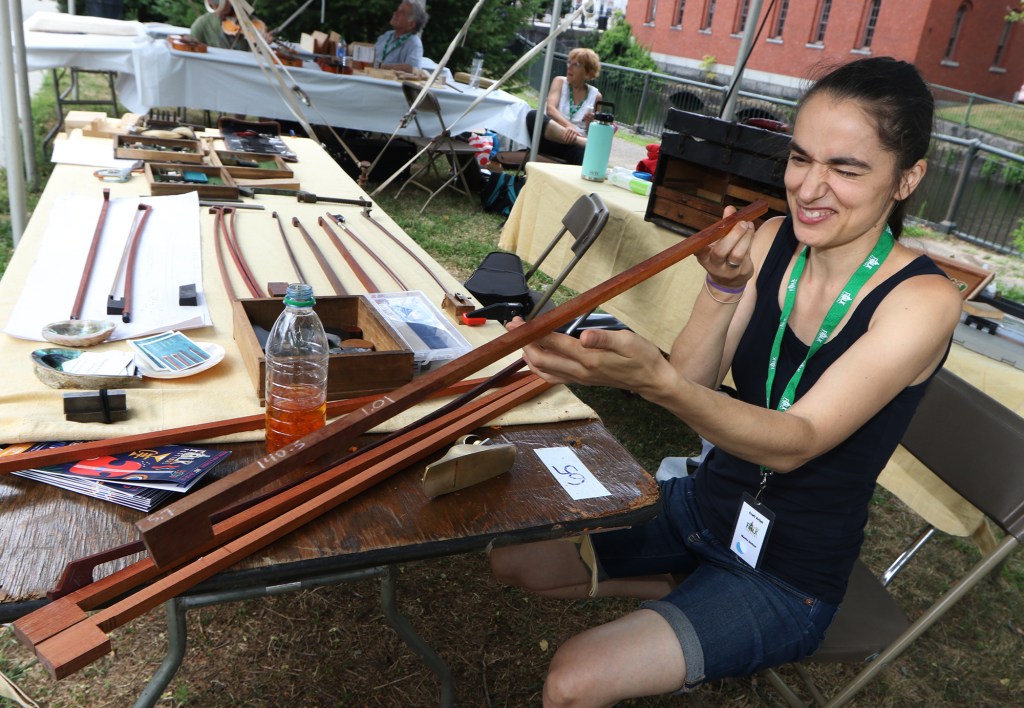 LOWELL — Mariia Gorkun was training to become a professional violinist in the United States when she stumbled upon a closet full of old instruments donated to her university.

They were in “appalling condition”, having been stored in a dry closet. Some parts were missing entirely and others, Gorkun said, just looked “miserable”.

It was then that Gorkun had an epiphany.

“All of a sudden I remembered how fascinated I was with the luthier who repaired my instrument in Ukraine, and I spent a lot of time in his shop,” she said. “I was just like, ‘Wow, I bet I could do that.'”

While earning two master’s degrees in her home country of Ukraine and in Boston, and performing with the acclaimed Ukrainian National Opera in Kyiv, Gorkun continued to perform with instruments. catering without any training. She lived in two worlds: doing and playing.

This year’s Lowell Folk Festival spotlights both the musicians and instrument makers of the Folk Craft Area, where Gorkun and 12 other craftsmen and music artisans presented their work to spectators in Lucy Larcom Park on Saturday.

After Gorkun decided to quit her orchestra, she joined violin maker David Hawthorne in his shop in Waltham and just a few months ago ran a full-time catering business from her home in Andover. There she crafts, restores and styles the bows in a delicate and intricate process and considers humidity, history and several other factors.

“I have a reputation for being a dentist,” Gorkun said with a laugh. “You don’t want to remove healthy tissue. … It’s one of those particular processes that you have to be very, very careful about.

This will be Gorkun’s first appearance at the Lowell Folk Festival, where she plans to show attendees her bows and gear and teach them the intricacies of creating the musical instrument.

“I know so much about music that I guess it was something I could go back to as a student,” Gorkun said. “It’s fun to reveal something that wasn’t there.”

Chris Pantazelos of Spartan Instruments at Lowell also fell into the restoration business in 1985 after studying classical guitar and even building his own in his late teens.

His introduction to music began with his father and uncle, who both played the Greek bouzouki, which resembles a Renaissance lute. Pantazelos remembers being captivated by the instrument and sneaking around just to pluck its strings when his father wasn’t around.

Since then, Pantazelos said he has restored “hundreds” of instruments under the tutelage of Peter Kyvelos at Unique Strings in Belmont and later in his own shop, which he opened in 2015.

Pantazelos’ Greek heritage informs some of his restoration work, as he still repairs bouzoukis, but also works on other ethnic instruments, including the oud, of Turkish and Arabic origin, and the mandolin from Italy.

The oldest instrument he ever worked on was a mandolin which he says was created in the 1700s, repairing it to “museum standards” and even ensuring it was still playable. When removing ebony and ivory from an old piano, Pantazelos said it was difficult to find the right materials.

“He had ivory sticks, and there were broken and missing parts and of course ivory is no longer legal,” he said. “It was fascinating to work with bone and ivory, and bone and ivory are pretty much the same in many ways. Working with bone is an interesting challenge in terms of trying to bend it and work with it.

Pantazelos’ art of violin making is “as scientific as possible”. He worked on several restoration projects for the Museum of Fine Arts in Boston and the Musical Instrument Museum in Arizona, sometimes leaving old parts of the instrument behind for preservation.

Pantazelos joined Datev Grekorian, an Iranian oud player, at the Makers and Players workshop on Saturday afternoon with uilleann pipe player and maker Will Woodson and other musicians.

Maggie Holtzberg, head of folk arts and heritage at the Massachusetts Cultural Council, has facilitated the workshop and curated programming for the Folk Craft Zone since 2007, choosing themes that resonate and expose audiences to new artistic concepts. .

Ahead of this year’s festival, Holtzberg said she was looking for a theme that would engage audiences after two years of pandemic delays and cancellations, focusing on the interesting art of restoration and creation.

“Sometimes people talk about western music and world music, but actually everything is world music, everyone has a culture and a tradition,” Holtzberg said. “That’s the perspective we take in this area, including the very first indigenous musical instruments.”

Andre Strongbearheart Gaines from Grafton performed on his handcrafted hand and water drums and displayed his paddles, jewelry and a feather box made from old wood from a cedar swamp.

Gaines is part of the Nipmuc Nation, an indigenous tribe for which he creates handcrafted instruments and regalia using the same methods, practiced for tens of thousands of years.

“I’m a traditionalist, a cultural steward for my people, so it’s important to me to teach the old traditional ways,” Gaines said at the festival. “We were invisible for a long time.”

Boston-based Carl Smith and Justin Petty were also featured alongside the Merrimack Channel, drawing a crowd with their steely performances of modern songs, including 2017 hit “Despacito.”

It was the fourth or fifth time that Pantazelos presented his art at the festival, but he has been attending as a spectator since the early 90s. He feels lucky to have such a range of folk acts and artists. in his own backyard.

“Show me something that is more important than arts and culture in human life and activity. …Art and culture are probably the most important spiritual pursuits we have as a species,” Pantazelos said. “We’re lucky that here in Lowell, we have him in our town.”