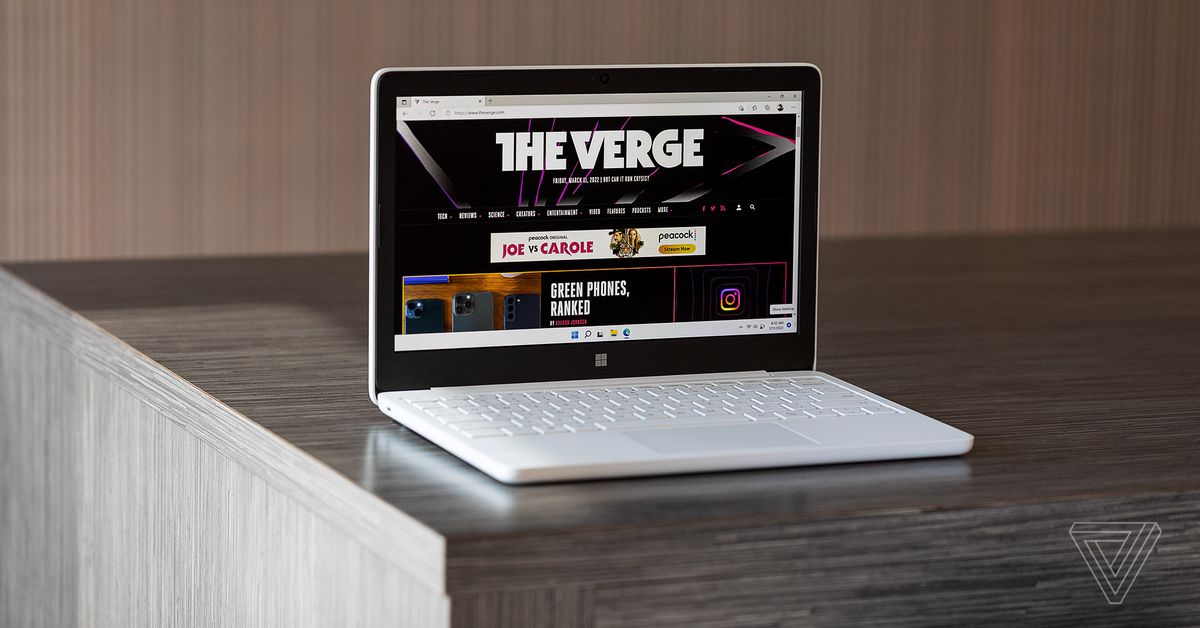 When I review a particularly ugly Windows laptop, I often refer to it as a “laptop cart”. If you were a student at any time after the early 2000s, you probably understand why. The laptops that schools provide to elementary and middle school students are known to be ugly, old, and terrible in many ways.

With the Surface Laptop SE, tailor-made for education and sold only to schools, Microsoft is trying a different approach. The Surface Laptop SE is a pretty laptop. It looks like a miniature version of the company’s flagship Surface Laptop line, with the recognizable logo on the lid and bottom bezel. It is quite light, at only 2.45 pounds. Unlike many clunky school models, this is a device that I can easily see appealing to adults in the consumer space.

If it weren’t so slow.

I won’t hold back: it’s the slowest computer I’ve ever used. I’ve tested all sorts of budget Windows Chromebooks, tablets, and laptops during my tenure as a hardware reviewer, and man, this thing crawls. I know Intel’s budget-oriented Celeron N4120 is basically what’s available at that price (my model is $329, though I’m sure schools will negotiate wholesale pricing and such), but damn it, it’s slow. It takes a while for pages to load and windows to resize to where I need them. Jumping between the dozen or so Chrome tabs I usually use was a pain, and typing in Google Docs was quite slow.

“Slow,” of course, is a relative and somewhat subjective term. The speed expectations of an adult laptop reviewer who sits on Zoom all day are likely very different from those of an average third-grader. So I called a few teachers and asked them what exactly their students were doing on their school devices and how much power they actually needed.

Whitney Rancourt, a reading teacher at a Texas-based elementary school, says her students do a lot of their homework in Google Classroom, along with a few other educational software that I couldn’t download or test because the Laptop SE doesn’t not allow users to download things by themselves (good for schools, a problem for me). Rancourt lets them play background music while they work and play math games or listen to audiobooks if they finish early. Her students usually do one thing at a time and don’t need to open multiple tabs.

For that sort of thing, the Laptop SE is certainly good enough. A tab or app, even if not fast, will be fine. And good news for the students: I tried Prodigy, a math game that Rancourt students like to play. It worked very well, although my poor performance was a stark reminder of how long I had been since taking algebra.

For older kids, I’m a bit more skeptical. Robert Puharich, a health teacher at the BC college, usually asks his students to use their laptops to do research on the internet – reading articles, googling, etc. They also frequently use Microsoft Word and may occasionally edit images in Photoshop. They typically run up to five browser tabs at once during these search sessions, says Puharich.

Five tabs would push it on this laptop, I think, especially if you have little time to do your homework before it hits the cart again. If I was doing this level of multitasking, I’d much rather be on the $349 Lenovo Flex 3 Chromebook (also powered by Celeron), on which I was able to run over a dozen Chrome tabs without issue.

Microsoft’s own apps, such as Word and Paint, unsurprisingly run much smoother on the Laptop SE than all the browser-based G-Suite things I’ve used. Chrome generally took several seconds longer to open and load documents than Word.

The Laptop SE is also not ideal for video calls, which Puharich students sometimes have to do. On every Zoom call I ran on the OS, at some point I got a notification that its CPU was overloaded. The sound was cracking and my colleagues often told me that I was frozen.

When I review a computer, I religiously use that computer for everything I do during that testing period, no matter how good that computer is. The SE is the first time I made an exception and made important video calls on another device because I couldn’t trust this Celeron not to screw up. Students certainly don’t need perfect webcam quality, but they do need to be able to reliably hear what their teacher is saying without distortion.

So when it comes to performance, the SE is a bit of a mixed bag. In other areas considered important by Rancourt and Puharich, the results also varied.

For example: durability. This is the quality that the two educators named as the most important for a student laptop. After all, these devices are used all day, every day, by many different students who may not be particularly invested in their longevity. “They have to be able to withstand a lot of drops and abuse,” says Rancourt, whose students use Chromebooks in class. “Even when we teach and re-teach how to carry the laptop from class to class, slips and falls happen.”

The Laptop SE is decidedly robust. I was intentionally rough during my week of use, threw it everywhere, beat it into backpacks, and ate and drank nearby. (Sorry Microsoft!). No scratches or dents.

I also appreciate that the SE is quite repairable too, with seven screws on the bottom that are easy to access and remove. Microsoft said it would sell spare parts through its authorized service providers, allowing IT administrators to replace components onsite rather than having to ship devices elsewhere for repair. That’s probably the Laptop SE’s biggest advantage over most devices of its size.

But that white keyboard… I don’t know. It looks nice. But after only a week of my testing, there were already some visible stains on it. I can’t imagine it won’t be visibly dirty with dozens of hands smearing it every week.

Both educators also mentioned battery life. A student’s laptop that dies in the middle of a class can be disruptive, and a device that shows up to a class dead because it didn’t load properly on the cart leaves teachers short of energy. ‘unity. Unfortunately, the Surface Laptop SE didn’t reliably last a full school day of continuous work — I sometimes saw more than six hours from a charge, but often got closer to five and a half hours.

Boot time also came up a few times in my conversations with teachers. Setting up a classroom full of kids on laptops is big enough without having to wait a long time for those computers to turn on. With Puharich’s school’s current Windows laptops (which are “awful,” he says), “the moment you unload the cart, start the computer, and find all the problems, you have to clean them up.” He added: “If you can load the thing as fast as possible, it will solve the majority of our problems.”

I’m sure the SE boots faster than older machines used by Puharich, but I still haven’t been blown away by the speed. From power off, the OS may take more than 30 seconds to display the Windows logon screen and approximately another 15 seconds to access the desktop. Even a budget Chromebook or older iPad should be up and running in less than half that time.

But the biggest issue I have with the Surface Laptop SE is its screen size. Puharic and Rancourt recognize the value of portability, but they’re also convinced that 11.6 inches is too small. They have both worked with students with visual impairments or learning disabilities who require very large text. I had to constantly zoom out on the SE laptop (which makes text look smaller) in order to see the content I needed – a device that size probably wouldn’t serve these students well. (The display is also quite low resolution, at just 1366 x 768.)

Ultimately, I think the main selling points for the Surface Laptop SE are its design and repairability. It looks and feels several notches nicer than many of the bulky Windows laptops schools give out today. He is able to do the work that an elementary school student could do. And I don’t mean to undersell replaceable parts – that’s huge for IT, and it’s great to see Microsoft committing to such a big repairability effort.

But when evaluating this device, customers will need to consider how to balance the needs of its IT administrators with the needs of its teachers and students. This calculation may look different for each school. But the older a child gets and the more Internet proficiency they have, the more their load can push that processor. There are Chromebooks and iPads with faster performance, faster boot times, and better battery life that are also worth looking into.

And ultimately, I urge schools to spend more money on larger-screen, higher-resolution devices if they can, because accessibility for all students is worth the investment.