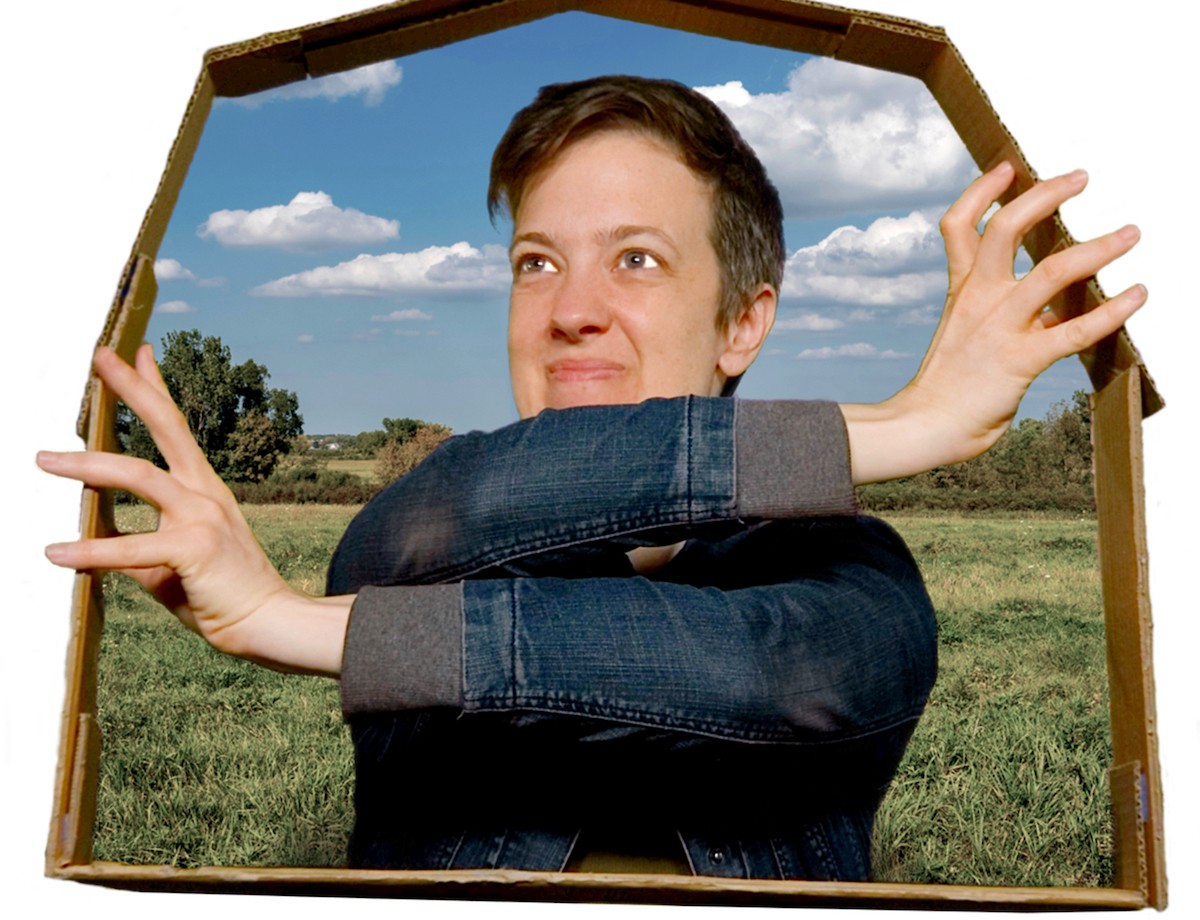 Erika Kate MacDonald’s obsession with collapsing barns led her to create The identity of the barn.

After two years supporting her quirky “Kinda Weird. Like You” A Cincinnati Fringe Festival tradition with mostly virtual presentations, the 19th annual Cincy Fringe returns June 3-18 with live, in-person and indoor productions. Artists from 15 US states, Washington DC and Australia will perform for two weeks on the Jackson Street stage of the Know Theater in Over-the-Rhine, as well as on the classroom stages of the nearby Art Academy of Cincinnati.

To give the festival new energy, Know Theater has hired Katie Hartman as Fringe Producer. Along with Nick Ryan, the Brooklyn-based singer, songwriter, actor and improviser is known to Cincinnati audiences as one of the Coldharts. Starting in 2014, they entertained rabid Cincy Fringe fans with a series of fearlessly dark shows: The Legend of White Woman Creek, Edgar Allan, Eddie Poe and The Unrepentant Necrophile. They called their works “designed musical theater inspired by American Gothic.”

How did Hartman go from performer to producer? She says CityBeat that when the pandemic halted performances in early 2020, she was initially grateful for a break from the Coldharts’ arduous touring schedule.

“When everything stopped and we were forced into quarantine, I didn’t feel the need to create anything new. I had the opportunity to reorient myself with my body, my practice, my life as a theater artist,” says Hartman. “I really have to prioritize the most important things. It’s become important to understand how to help others, to make it easier for other artists.

Like many, Hartman found herself at a crossroads during the COVID-19 pandemic and discussed options with a friend.

“I said, ‘If I had the chance, I would really like to do something like produce the Cincinnati Fringe Festival. I don’t want to reinvent the wheel. I don’t want to do my own festival. I really want to build something big in a place where it’s already established, where I can see how improvements could be made,” she recalls.

Four days later, Hartman received an email inquiry from Cincy Fringe organizers that mentioned the search for a new producer. Believing he had written the fastest cover letter ever, Hartman immediately replied, “Have you found this person yet? Because I want to apply.

“This is my dream job!” she says. “I feel so privileged to work for an organization that inspires so much enthusiasm in so many people and is so willing to devote time and energy to it. The team I work with is so passionate, it’s just a pleasure to work with.

Hartman does not live in Cincinnati. “I am an artist and I come from this perspective. One of the things I hope to bring to the festival is a more inclusive atmosphere.

To make the festival’s legendary after-parties more inviting, she moves them from the Know Theater’s underground bar to the outdoor parking lot just north of the theater with her vibrant “Looking Good” mural. It will become a beer garden with free daily programming on an outdoor stage. On weekends, parents and children can take part in a workshop, or adults can let the children play while they go to the theater to see an adult show.

“We’re going to have a lot of all-ages friendly stuff,” Hartman said.

“It’s important to me that everyone feels welcome at the Cincinnati Fringe, regardless of your background, your abilities, what you can bring to the table. Everyone has something to offer,” she continues. “I want everyone to be able to enjoy the festival, whether they can pay to see a show in an indoor venue or if they just want to enjoy our outdoor stage. Everyone is welcome!”

During the two weeks of the festival, there are 38 ticketed events, offering 177 performances in total. View all listings on CincyFringe.com.
Listed alphabetically below, find 12 Cincy Fringe shows to consider.

The identity of the barn is from storyteller and Cincy Fringe veteran Erika Kate MacDonald, who created this entertaining one-man show based on her obsession with collapsing barns. She will be joined by another Fringe favorite, guitarist and vocalist Paul Strickland. MacDonald is a traveling theater maker whose original works have been presented Off-Broadway and honored many times at fringe festivals across the United States and Canada.

be my thief from Queens’ Mac Rogers is a twisty single-player thriller about a man who believes a double has replaced his wife. The tale explores themes of post-pandemic anxiety, predatory capitalism, and the in-person return to work debate. Rogers is a former Cincy Fringe Award winner, and his Gideon Media has produced popular podcast thrillers.

twisted compass by Neil Brookshire of Egg Harbor, Wisconsin, is a one-man show based on interviews with a friend-turned-army medic. It details deployment and combat experiences in Iraq and how war can shape a person’s concept of what is normal. It also deals with trauma, mental health, recovery and relationships.

Change my major to Joan by Boris Dansberry of Philadelphia (originally from Newport, Kentucky) is inspired by the spirit of Joan of Arc. This eclectic presentation – described as a “medieval trans concert PPT” – explores the trials and tribulations of queer experience using humor, Nirvana, masks, George Bernard Shaw, beans and Friedrich Schiller with live music. from local power station Jess Lamb and The Factory.

Charlotte Van Helsing befriends a vampire, a crow, and (maybe) her father by Emily Borst (a graduate of Northern Kentucky University’s musical theater program) tells the story of a young woman who discovers that growing up might be a little more than she bargained for as she navigates the secrets and family expectations.

Destin, USA by Laura Anne Harris of Vancouver, Washington is a solo exhibition based on Harris’ 2016 experience as a relay operator for people who are deaf or hard of hearing after the presidential election. Residing in Donald Trump’s America, she explores the hidden humanity of the American people. The show uses captioned video performances by three deaf actors.

Father, Daughter and Holy Toast is by Barbara Brady of San Francisco (after more than 20 years in Cincinnati). It’s a humorous one-man show about being middle-aged, divorced, and living in her childhood home with her eccentric elderly father, who uses scientific workarounds to stay together. What must be sacrificed: the dignity of the father or the independence of the daughter? Brady has performed at Fringes in Orlando and Great Salt Lake.

Jinkies! from Cincinnati’s Queen City Flash follows a hit from 2019. It’s the next thrilling adventure in the life of a nosy teenage detective and her dog. Director Bridget Leak and playwright Trey Tatum specialize in bold stories told with irreverence. This one answers the question, “What if the Hardy Boys wanted to burn that shit?”

Word of Laertes by James Word of St. Louis is a first. Fans of the This American Life podcast might remember “Act V,” about a one-act production of Hamlet in a Missouri prison. Word played Laertes, and that changed his trajectory. He learned that he had acted all his life; he just didn’t know. Today, Word is a storyteller helping people understand that it’s never too late to change. “Crime is easy,” he says. “Hamlet is difficult.” This is the premiere of his show.

Sadec 1965: A love story is from Flora Le of Washington, DC. Learning that his ex-father has cancer, Le sets off on a six-week motorcycle trip through Vietnam to seek answers. It is characterized by the fact that Motorcycle Diaries meets Eat, Pray, Love. Le’s painful life experiences allow him to create beautiful stories of resilience, forgiveness, personal transcendence and love.

Wuthering: a musical on the moors by Cincinnatians Hannah Gregory and Caitlin McWethy is a folk musical adaptation of Emily Brontë’s novel in which Cathy and Heathcliff live as wild, uncontrollable Roman candles. Gregory and McWethy’s previous Fringe projects were award-winning Descent: a Murder Ballad and The Belle and Boone Helm.

Fringe fans should also keep an eye out for one-time special events, including True Theater (June 16), an evening of behind-the-scenes monologues sharing what it’s like to be a Fringe performer. Additionally, Kevin James Thornton, a storyteller and former Cincy Fringe favorite, will deliver a pair of evening performances (June 11-12) featuring material from his massive TikTok following that has garnered him over a billion views. .

Send CityBeat a news or story tip or submit a calendar event.