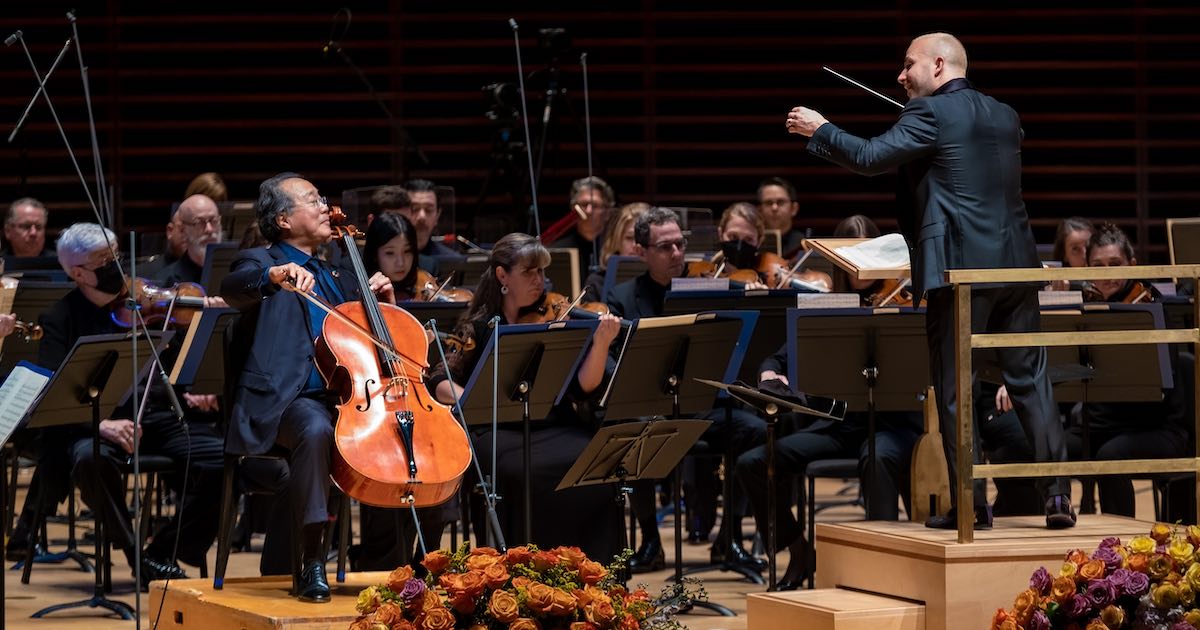 Get a compelling long read and must-have lifestyle tips delivered to your inbox every Sunday morning – perfect with a coffee!

Tuesday was a big day at the Kimmel Center. The seasonal balmy night marked the opening night of the Philadelphia Orchestra and, more importantly, the first in-person performance of the Philadelphia Orchestra at the Kimmel Center since the onset of COVID. The Philadelphia dress and hairstyle was there, rising to at least five extended and well-deserved standing ovations. Yannick Nézet-Séguin was there, baton in hand. The famous cellist Yo-Yo Ma was there. And then there were cell phones. Bloody cell phones.

Shortly after Yo-Yo Ma took the stage to perform, solo, an emotional movement from a Bach cello suite – a pleasant surprise to the audience, since this song was not on the program – that the first cell phone left. This was Apple’s standard ringtone, the one listed as “Open (Default)” on your iPhone’s ringtone options list. The ring felt like it had lasted forever but was, in fact, silenced within seconds. Members of the audience were visibly squirming in their seats at the distracting offense, a veritable philharmonic misstep.

But it didn’t stop there. you would have think that those who heard the phone ring would, at this point, have taken a second to check their own phones, but that clearly was not the case, as became evident once the second phone turned off. Fortunately, that was just the one-time ding, The Chime, possibly signaling a Venmo SMS or payment. Who knows? We do not care? But in that acoustically enhanced room, and at another quiet moment during a different song, it sounded like an angry, drunk, impatient hotel guest snapping a hand on one of those service bells you don’t. never see hotel offices again.

Surely that would be it, right? Because now that two phones had abruptly interrupted the long-awaited show, any decent person would check that ringer switch or, you know, just turn off the phone. But no. While still another quiet moment someone’s phone made an unidentifiable noise that sounded like a 1960s science fiction computer sound effect, as if the spaceship had just received an incoming message from headquarters, probably: “TURN OFF YOUR FUCKING PHONE! “

The final song of the evening, that of Ravel Bolero, described by some as a “15 minute orgasm”, is well known to go from virtually nothing to a dramatic and loud climax. Alas, the fourth cell phone couldn’t wait this part of the song. No. This phone, which produced the “Circuit” ringtone, chose to do so in the first few moments, during the soft, subdued and so silent foreplay. But hey, at least it wasn’t “By the Sea”, was it?

In fact, I chose the last offender, who was only a few seats ahead of me; I could see the person fumbling with the phone to stop the ringing. And I had this imaginary conversation in my head where I asked what had happened and I was told, “I forgot. Really, what other excuse could there be for not at least silencing your cell phone? This is why they vibrate. As a participant, you have only one responsibility: to keep silent. That’s literally all you need to remember while you’re sitting there. Be quiet. Do not talk. Do not unwrap frigging candy. And, last but not least, don’t let your cell phone ring.

Obviously, I have feelings about this. But I’m just a member of the audience, just a music lover. How should musicians on stage feel when a cell phone rings, rings or rings at the worst possible time? I contacted two longtime members of the Philadelphia Orchestra who agreed to discuss this on condition of anonymity.

“It’s disturbing,” one of them told me Wednesday morning as she prepared for the Philadelphia Orchestra performance Wednesday night at Carnegie Hall. “When you play and do something so serious, solemn and calm, that moment between the audience and the musicians is so sacred. And then a phone rings. But it’s also the world we live in.

She recalled the story of a cell phone that exploded during a New York Philharmonic Orchestra concert. In this case, it was the “Marimba” ringtone, a true classic. The conductor Alan Gilbert did the unthinkable: he stopped the song. This never come. Members of the audience shouted at the author, who was positively humiliated. Shame. He later said to New York Times he couldn’t sleep for two nights.

The member of the Philadelphia Orchestra who told this story told me that she felt Gilbert had gone too far. Yannick Nézet-Séguin, she says, approached the problem in a different, more artistic way.

“A phone will ring in a quiet moment, and Yannick will do a fermata,” she said, referring to the musical term for the extension of a given note or chord. “So we all hold it until the bells stop.” And then we continue. “

She went on to explain that any orchestra member whose cell phone rings during rehearsal – pretty much a capital offense in the orchestral world – must buy donuts for the entire orchestra the next day.

“So we do our best to avoid that,” she laughs. “You’re talking about 100 donuts. And the people will give you specific requests for the type of donuts they want.

Why doesn’t the Kimmel Center just confiscate cell phones in the lobby before each performance and customers not collect them after? It’s not like you’re allowed to record on the show anyway. And that’s what artists like Barbra Streisand and many top comedians are asking for.

A spokesperson for the Philadelphia Orchestra told me Wednesday afternoon that the organization had discussed such a policy but had “no plans to implement it yet.”

The first orchestra member I spoke with had a different idea.

“At the Kimmel Center, they make a ‘Please shut down your cell phone’ announcement at the start of the show,” she notes. “But I don’t think that’s enough. At Carnegie Hall, they literally project this message in giant letters into the concert hall before the show, and it stays on the wall until the show begins. It’s hard to miss.

The other orchestra I spoke to had a more original approach.

“Cell phone jamming technology,” he half-joked. “Look, this has been going on for decades now. So, so long. You kind of have to have a sense of humor about it, I guess.