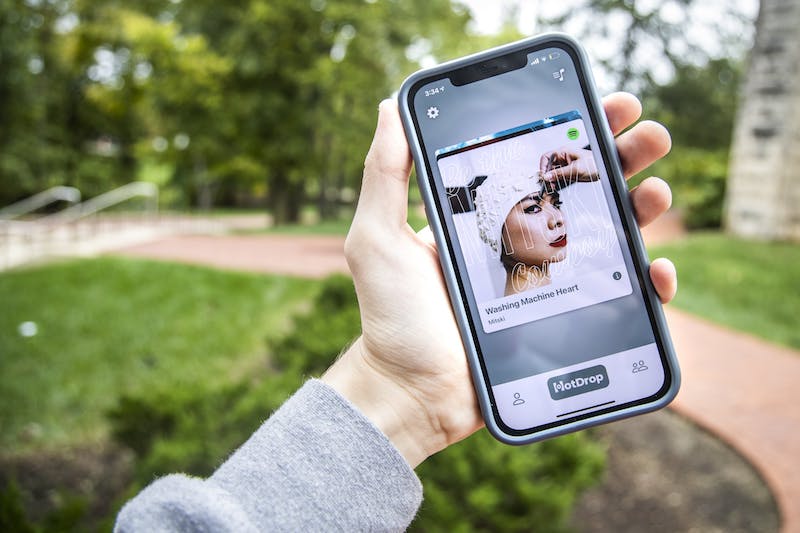 Two UI juniors launched their new HotDrop app on September 29, a new music app for users to discover and share songs with friends.

Co-founders Max Goldberg and Steven Segel said they see themselves as music fanatics and enjoy sharing new songs with friends. The two students said they realized they found streaming platforms like Apple Music and Spotify inadequate for finding and sharing new music.

HotDrop is a free music app that plays 30 seconds of a song and allows users to swipe left or right depending on whether they like the song or not. Users can swipe up to share the song with a friend or swipe down to add the song to a streaming app.

Browsing through an Apple Music or Spotify playlist, Goldberg said people tend to use their eyes first when deciding which song to play. By instantly playing a snippet of a song along with its title and cover art, users can base their judgment of the song on how it sounds.

“It’s like Tinder for music, and I got hooked on swiping,” HotDrop user Will Clarke said. “It’s not like any other music app I’ve used before. I would definitely recommend HotDrop to my friends.

Goldberg said he believes popular streaming sites are designed to listen to songs you already know, not find new ones.

One of the main goals Goldberg and Segel said they had in mind when designing the app was to create an auditory experience by allowing users to listen to music instantly.

“Right off the bat you’re going to have this gut reaction,” Goldberg said.

Goldberg and Segel said the app is free and ad-free. Instead, the income is generated by the collaboration of the artists.

Throughout the next month, Goldberg and Segel have said they hope to partner with artists to release exclusive songs on HotDrop. They said they wanted the HotDrop community to have a voice in deciding which artists and songs get popular.

In the first week of release, Segel said users have listened to over 400,000 songs and the app has grown by 25% daily.

They estimate that more than 1,000 UI students downloaded HotDrop within 24 hours of its release using analytics software that tracks user geography, Segel said.

Segel said the initial feedback they received was very positive, with artists, DJs and users commenting on how easy it is to share music with friends.

“At first we got a lot of feedback saying it’s easy to get lost and pass the time like TikTok,” Segel said.

Goldberg and Segel said the response from the HotDrop community was very encouraging. They have stated that the feedback they receive bolsters their user experience focus, and they are excited to see HotDrop grow.

“We are trying to create a platform where students who are passionate about music, passionate about sharing music can come together and decide on the famous artists of tomorrow,” Goldberg said.

Everybody Knows Podcast Gets Over 74,000 Downloads in September

The iconic Belconnen owl is featured as a postmark