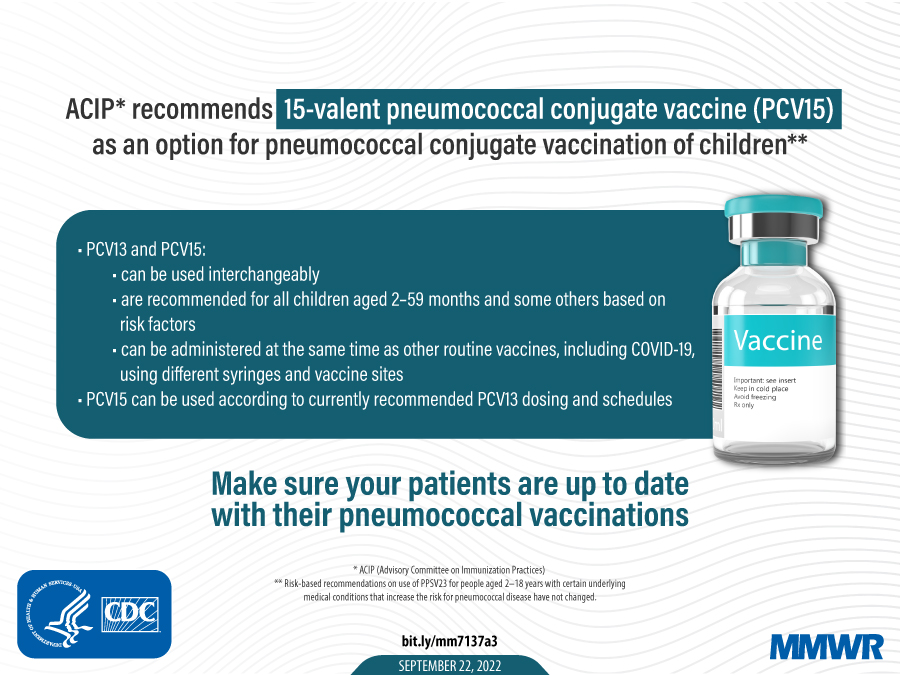 Use of the 15-valent pneumococcal conjugate vaccine in US children: updated recommendations from the Advisory Committee on Immunization Practices – United States, 2022

Incidence of pneumococcal disease in people aged less than 19 years

Acute otitis media is one of the most common diagnoses associated with outpatient pediatric medical visits (8) and the prescription of antibiotics (9). According to a recent analysis using administrative data, 20,800 episodes of all-cause acute otitis media per 100,000 person-years occurred among Americans under the age of 18 in 2018, with a higher incidence in age groups. younger age (ten). From 2015 to 2019, in a cohort of 319 U.S. children aged 6 to 36 months with clinically diagnosed acute otitis media, Streptococcus pneumoniae was detected in the middle ear fluid of 24% (11); 9% of these children were infected with a PCV13 serotype (including 6C), and 8% with one of the serotypes included in PCV15 but not in PCV13 (serotypes 22F and 33F) (11). Additional analysis using administrative data estimated that among people younger than 18, 1,280 to 3,990 health care utilization episodes per 100,000 person-years occurred in 2014 for all-cause pneumonia. confused (12), and that in 2018-2019, 87 to 680 hospitalizations per 100,000 population occurred for all-cause pneumonia (13). Using population-based surveillance data, S.pneumoniae was detected in 4% of people under the age of 18 who were hospitalized for community-acquired pneumonia; however, the attributable proportion of pneumococci and serotype distribution among all-cause pneumonia in children and adolescents have not been determined (14). According to the US Multistate Surveillance, the incidence of IPD†† in 2018-2019 was 7.2 per 100,000 children aged under 5 and 1.5 per 100,000 people aged 5-18. PCV13 serotypes accounted for 21% and 34% of IPD cases in children under 5 and people 5-18, respectively; likewise, additional serotypes unique to PCV15§§ caused 15% and 23% of IPDs in children under 5 years of age and people 5 to 18 years of age, respectively (15).

Phase II and III randomized controlled trials (RCTs) have evaluated the immunogenicity of PCV15 versus PCV13 in healthy infants and children (16–19), people aged 5 to 17 with sickle cell disease (20) and people aged 6 to 17 living with HIV (21). The following outcomes were measured 30 days after administration of ≥1 dose of PCV, as specified in the respective study protocols: geometric mean (GMC) concentration of serotype-specific immunoglobulin G (IgG) (16–21), proportion of participants achieving serotype-specific IgG value ≥0.35 µg/mL (response rate) (16–19), and the geometric mean titer of opsonophagocyte activity in a subset of the study population (17,20,21). One of the phase III RCTs recruited healthy children aged 42 to 90 days who received PCV13 or PCV15 at 2, 4, 6, and 12 to 15 months of age. Except for the GMC serotype 6A report after dose 3, PCV15 met the criteria for non-inferiority¶¶ to PCV13 for the 13 serotypes shared regarding response rate after dose 3 and GMC ratio after dose 3 and after dose 4. PCV15 elicited a statistically significantly higher immune response for serotype 3 than for PCV13 (17). PCV15 met the criteria for non-inferiority to PCV13 for both single serotypes 22F and 33F (17).